Recently, my mother helped out with a pizza party and as a reward, she was able to have some of her favorite pesto veggie pizza.

Sean and Lola at a pizza event in San Diego

I’ve also had the chance to make pizza with my father for the past few years at the Great Western Bicycle Rally.

My dad enjoying a well deserved slice of pizza

Who knows what future pizza events we will be doing but, we are sure to have fun and meet many new people along the way.

No matter where I go in the world, I seem to find pizza at the core of many things.  Most recently, my friend Brendan and I were motorcycle touring on the West Coast from San Diego to Washington State.  We were riding vintage Honda Motorcycles from the early 80’s and camping our way up the beautiful West Coast of the USA.

The Oregon Coast is so beautiful, if you haven’t been, drop what you are doing and explore.  We stopped in Bandon, OR for some coffee and to talk about our upcoming travel for the rest of the day.  We ended up talking with a cool entrepreneur named Jon Hawkins, his beautiful wife Nicole Hawkins her business associate Grace, we mentioned that we were planning on heading next door to check out the brewery with the outdoor deck.  It turns out that Jon was the owner of the Bandon Brewing and he invited us to come try some of his beers, at this point, I knew that the rest of our riding that day was probably over.  We happily walked next door and took a short tour of the brewery before sitting down to try some beer, as soon as we sat down, I noticed a large beautiful pizza oven in the center of the kitchen.

Our conversation quickly turned to pizza and beer and soon we’d had several tasty beers and our riding day was happily finished.

We ended up talking with many visitors and locals, Bandon Brewing really had a welcoming feeling and it was a place that was designed to bring people together and share some great stories while sipping down some tasty beers.  We met Kip from Seattle, he was headed down the coast on his BMW motorcycle.  Wild Bill was a local Bandon guy who had traveled to the Southern tip of Chile on his motorcycle.

Later that evening, we ended up meeting Jon’s family and he put us up for the evening in his house.  These were the first beds we’d slept in during our travels, so it was excellent to get a day of socializing with new friends and great beer and pizza.  The next morning Grace cooked us some delicious French toast and soon we had our iron horses loaded up and we were ready to hit the road after a great stop with our new friends.

Jon even has some plans to get into the wood-fired pizza business with his unique REO classic truck.

If you find yourself in Bandon,  you must stop and see Jon and his crew and try some delicious beer and pizza!

We had the opportunity to tour the ZLAC Rowing Club on the North end of Mission Bay, San Diego.  ZLAC is the oldest women’s rowing club in the world and is available for wedding or party rentals.  The Rowing Club has a unique patio area, a large catering kitchen and direct access to the beach for weddings or BBQ.  We spoke with several of the board members at ZLAC and they mentioned all sorts of parties they had hosted over the years.

You can find out more information about renting the ZLAC facility here.

People often ask us what it’s like to own and operate a small business.  It depends on how you run your business and if you actually enjoy the day to day operations.  At Pacific Pizza, we find joy in many tasks that don’t actually involve making pizza.

Just today, we put a fresh coat of pain on the dome of the pizza oven, it was a beautiful day to be outside with paintbrushes and rollers in hand while listening to some Huey Lewis.

We enjoy going shopping for fresh ingredients, sourcing our cooking wood and making our pizza dough fresh each week.  Did  you know that we started a stairs workout on Tuesdays before making pizza dough?  What a great way to get the day started with 20 friends.

At Pacific Pizza, we think it’s great to incorporate friends and family into our daily operations, thanks to all those who have helped us out through the years!

Our crew of friends celebrate after a big first day of pizza.

The thin vs. THICK crust argument has been going on long enough, let’s settle this right now!

If you are REALLY hungry and you haven’t eaten for days, perhaps a thick crust pizza is what you need.  For most of us, pizza is about enjoying a delicious meal with friends and perhaps trying some new pizza combinations.  If you really want to taste good pizza, you want to go light on the sauce, cheese and toppings, it sounds strange, but pizzas cook best with less.

When cooking with a wood-fired oven, the temperatures can get up to 850F degrees or higher!  If you want that nice crispy crust on the bottom, you”ll need to go thin crust so that your toppings and cheese don’t burn in the process.  It only takes 2 minutes to cook an 11″ pizza in the wood-fired oven, so things happen very quickly.  If you want to have a thicker crust, you’ll need a lower temperature and let’s face it, then we are just talking bread with pizza ingredients.

Have we solved the thick vs. thin pizza argument?  As much as we’d like to say yes, we probably haven’t.  If you are having a party coming up,  consider wood-fired pizza from Pacific Pizza.

We think that caterers should help to make your life easier and let you enjoy your party.  Our friends at San Diego Party Ride compiled a list of suggestions for those who want to get the most out of their catering experience.

Check out the wedding catering advice list and see what you can do to make your wedding run smoothly so you can enjoy the party to the fullest just like your guests will.

If you are interested in pizza at your wedding, we cater rehearsal dinners as well as pizza fun after the ceremony.  Give us a call (619-365-5449) or send us a message via email for more information. 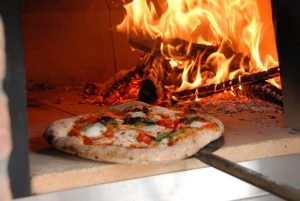 We saw this today and wanted to share it with our friends.  Happy holidays!

Are you looking for a fun way to spice up your holiday party this season?  We have catered many fun company lunches and parties.  It’s great to get everyone outside and engaged as they watch pizza getting cooked fresh in front of their faces.

Give us a call and we can help you plan your holiday party!

Pacific Pizza came to San Diego in 2014 and the first big event we participated in was Guildfest on the Broadway Pier. It was amazing to serve pizza literally over the water in San Diego Bay.

We had so much fun in 2014, we’ve returned in 2015, 2016 and 2017 will make our fourth year at Guildfest.  Your favorite San Diego Beer will be served at Guildfest and there will hot fresh pizza from Pacific Pizza.

This year we’ve had the opportunity to cater some fantastic weddings and rehearsal dinners in San Diego.  We recently catered for Brad and Andi after their wedding.  We had an excellent time meeting the guests.  Some of the family members were Italian, so it was up to us to make some delicious thin crust wood-fired pizza.

We are looking forward to more great parties this year and in 2018.  Let us know what you would like and we can make it happen!